How to choose gloves

How to recognize quality glovesTable of the size

The main Glove making factory in Dobříš, which historically included operations in Abertamy situated in Karlovy Vary region, has undergone dramatic development in the course of the last two decades. The times when the factory annually produced millions of gloves are gone and it seemed that there was nobody in the Czech Republic interested in traditional glove making anymore. Just a few years ago the Dobříš factory was surviving on export income and external owners were supplying developed foreign markets with local quality production. Despite the fact that it was cheap to sew here, and gloves were in high demand in western markets , the owners had gradually started to relocate production and machines into countries where labour costs were even lower. “For a while, it seemed that everybody would wear only gloves produced in Asian factories. These would cost you 200 CZK, and ours were twice as much. Nevertheless, I have started to observe recently that quality and more expensive gloves have come into fashion once again. This has apparently something to do with the chastening experience of customers wh had bought low-quality products in the past,” explains Ludmila Osičková.

One of the key characteristics denoting quality leather gloves is their adaptability to the shape of your hands. Should your gloves not adjust to your hands “like a second layer of skin” after putting them on, then it is a sign the leather was improperly processed and subsequently cut, or that the cheap and therefore unsuitable material was used. “The moment you put your gloves on, you can immediately sense that it is not ideal.

It truly does not pay off to be thrifty in this case,” points out lecturer Ludmila Osičková, bearing in mind it very much depends on working out the material and the way it is consequently measured out. It is fundamental to distinguish which market the gloves are sewn for – Frenchmen, for example, have longer and slimmer fingers in comparison with Germans and Czechs.

Nowadays customers give preference to products with a certain story, quality design or those intended for unique opportunities. The demand for men’s and women’s gloves of classical design, made of perfectly selected and prepared leather has been picking up again. Therefore gloves for car driving, golf and riding are becoming fashionable again. There are plenty of colour variations available on the market, yet the classical combination of black and brown remains dominant. “ with colours, itWith regard to colour a great deal depends on the cooperation with the leather tanner that must be able to fix the colour so that it does not ‘bleed’ if the glove gets wet,” points out Ludmila Osičková, whose glove wardrobe comprises more than twenty pairs. Glove preparation is a complex process involving several steps. If all are performed by a true professional, then properly sewn gloves, made of selected material, may serve to their owner for 20 years and more. Since leather is a natural material that keeps developing, gloves gain their own completely unique patina over time.

Hand in hand with rising standards of life, specific interests and with a passion to differentiate from the mainstream , demand for handmade gloves has been growing. These facts increase the chances for Dobříš to remain on the European map of glove making craft.

Here's how to measure and choose the right size gloves. 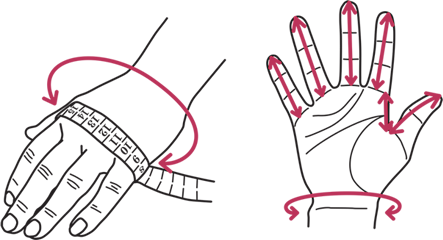